I first went to Italy in 1978. From the moment we stepped off the plane at Pisa airport I felt at home. It was an Alitalia 727, and we came out through the rear door, under the tail. I assumed that the overpowering heat we experienced was due to the residual heat from the engines, but as we turned the corner to walk to the terminal and the heat did not diminish, I began to feel that perhaps this was my kind of place.

I can’t put my finger on why I feel at home among Italians – having worked for and with them for 16 years, I am under no illusions: people are people the world over; some of them are kind, thoughtful and friendly, others are the opposite. Nothing new there. So I don’t believe it’s about the people, it’s the place.

Every so often I would have to make the trip to the factory and cradle of the company, in the little Piedmontese town of Alba. It’s not exactly handily situated for airports and so on, and the journey can be tortuous – especially by bus, as we did more than once taking groups to tour the plant. But in the last two years of my time there, travelling to Alba every three weeks or so became part of my job, and – having had a kind of fond regard for it already – I fell hopelessly in love with the place. It’s not the prettiest town in Italy – it’s got a socking great chocolate factory in the middle of it, for a start – but it has a certain magic.

If you walk around it, you quickly appreciate its age – the roads are still laid out in the Roman pattern, you can clearly see where the city wall ran, and the town is full, San Gimingnano style, of mediaeval towers and churches. In the evenings, with all the restaurants spilling out on to the streets, and traffic more or less non-existent, it is simply the best place in the world to eat.

I used to fly to Milan and drive down; it was the only way the schedules worked for me – Turin was nearer, but flying to and from there involved trekking to Gatwick and losing the best part of two working days – one in either direction – just travelling. The way I did it, I could leave the office at 3, and on the way back, not have to leave Alba until 5, giving me maximum time actually doing what I was paid for.

This meant that I would generally arrive at Malpensa Airport around 8 in the evening, and set off to drive south in whatever Europcar saw fit to provide me with – the cars ranged from a sublime Alfa, which I’d have taken home in my hand luggage, if I thought I’d have got away with it, to a PT Cruiser (immediately, and fairly, dubbed ‘the taxi’ by my Italian colleagues), a truly superb Fiat Stilo sport, which took a good 15 minutes off the 2 hour drive, to, memorably, a Smart ForFour. That one was, of course, the car of choice when I (not entirely the slimmest of people) was accompanied by my colleague SPJ, who was a good six inches bigger than me in all directions. We arrived at the factory the following morning, with the sump trailing on the ground and burst from the car like Charlie Corolli’s clowns.

But I digress, as so often I do.

The drive (let’s say it’s in a Lancia Musa, because that’s the trip I remember most fondly) takes, as I said, about two hours. Night falls as I go, and on this occasion, there is a spectacular show of dry lightning in the hills above Alessandria as I barrel past the Autogrills on the A21. As always, the final part of the road, from Asti down to Alba, is on the tortuous SS235, still not bypassed as far as I know, although the work’s been under way for about 5 years now. The road always wakes me up after an hour and a half of high-speed motorway driving; there are roundabouts (Italy has gone roundabout crazy, but no matter how often I drive there, they still throw me – it’s just wrong, going that way round one. And, of course, Italians treat them with disdain, so you have to be on your toes). Finally, the road bends round to the left and joins the line of what will one day be the bypass, and I can see the towers, and the garish neon of the sign for my hotel. Home again, I always think. I grab my usual parking place (and such a yelp of joy I gave when watching Top Gear one evening, and Jeremy Clarkson drove his Bugatti Veyron right past my parking place), check in (in increasingly fluent Italian) and go out to eat. It’s after ten, but we’re only just getting started. Only now is it really cool enough to consider eating, and so I join the rest of the town in hunting down the best food. My routine on my arrival day is, however, always the same – I head to Cincilla for carne cruda and pizza alla Diavola, washed down with the local beer. I’m tired and grainy after the journey; I did a full day’s work back in England, and nothing, but nothing restores me like Cincilla.

The owner (whose name I never do establish) greets me warmly – he knows I’m not a native Italian speaker, but we both pretend, and it’s there, in that tiny restaurant that I first realised that I could actually speak this language and make myself understood. He probably knows what I’m going to order, but we go through the rituals nonetheless. It’s summer, so I’m eating outside. On the street – there is still room for a car to pass if it’s really necessary, but any traffic is given the shortest of shrift by the diners – this is serious eating time, and even the shiny German cars everyone drives have to give way.

On the way back to the hotel, I relax. I’m back, and it feels like I’ve never been away. Tomorrow will bring much stress and tension – meetings about the project conducted in high-speed technical Italian, punctuated regularly by phone calls from my boss, asking how many of our demands are being met, but for tonight I’m free to wander the Roman streets of Alba and enjoy the atmosphere. The cafes are also occupying the streets, and the conversations are loud and exuberant. I pass the cinema which, delightfully, is in the courtyard of the museum – you can peer in at a scene Michelangelo would have recognised, but for the huge white screen at one end with the moving pictures on it. But it’s art; Michelangelo would have understood. I like to wander down side alleys – the town is more or less regular, so it’s hard to get completely lost, and to be temporarily lost here is a joy – windows open on to balconies, small but fearsome-looking black cats stare down at you, and the blare of televisions and arguments is somehow softened by the velvet night. It’s midnight, but the town is in full swing – children are being gently encouraged back inside, with the promise of gelati before bed. I feel like ice cream myself, but if I call into a cafe on the way back, I somehow always end up with some of the local grappa – this is nebbiolo grape country – Barbaresca and Barolo – and the grappa’s as good as the wine.

In the morning, it’s back to being a working town, and all I see is the inside of the factory, but in the evenings, Alba is mine, and part of me is Alba’s.

(and if I finish work early, I can escape into the hills in my little Musa and take pictures): 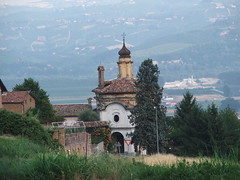