What I said back then:

What happened to us? Did we all have a collective seizure? For a while there, just about the time I moved to Inverness in 1985, it seemed that every third album sold in the UK was a Dire Straits recording. I mean, it was perfectly respectable music and all, even a few tunes which I might remember with fondness were it not for the over-familiarity which can kill all but the most perfect pieces of music. Just for the record, I don't own a Dire Straits CD, which probably disbars me from turning 40.

But I did own some Dire Straits vinyl. What I remember is the advertising in 'Sounds' - "Anyone can get into Dire Straits", next to a line drawing of a burning aircraft. 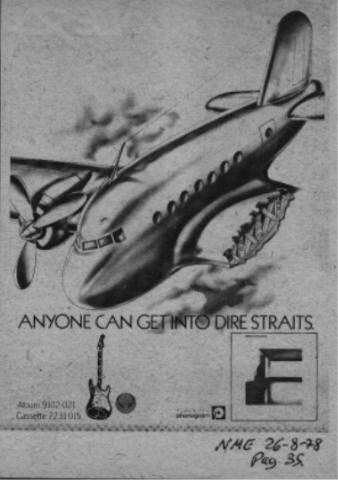 Mmm, tasteful, I probably didn't think. Then without warning, 'Sultans of Swing' was everywhere.

And, damn it, it's good. Catchy; interesting lyrics, the kind of thing I might be persuaded to buy. So, of course I do - I pick the album up one day in The Other Record Shop of blessed memory, and stare at it for several minutes, in that way I do. Well, I'm sure it'll be fine; and I buy it, and it is fine. And before I know it, it's April 1979, and I'm studying for my Highers - sitting at home all day, surrounded by books and notepads (jotters!) and snackfoods. 'Dire Straits' becomes my regulator - If I put it on and start to work on something, by the time it needs to be turned over (don't worry, kids - your parents will explain) it's time for a break anyway; by the time we get to 'Wild West End', I need to stop and change the subject. 'Wild West End' is, naturally, my favourite memory of the album... But really - 25 million people own 'Brothers in Arms'? Is that really necessary?

What I think now:

My first thought is that I wish I’d spent more time on that last line.  Then once I’m over my self-criticism, I ponder the phenomenon that was Dire Straits.  I still don’t own a CD, and I still managed to turn 40 somehow, but I do own some digital Dire Straits, mainly – I think – because I hadn’t heard any for a long time.  Also ‘The West Wing’.

It’s musicianly, of course – that always wins me over, ahead of raw energy or shambolic enthusiasm (there was a word for people like me in the pages of ‘Sounds’ –‘ musos’, or alternatively ‘Boring Old Farts’); and atmospheric.  I could go off into a rant here about how the musical world has changed in the last 30 years, about how if Dire Straits appeared today, no-one would get to hear of them, but I’m not sure that’s true – you’d just have to look a little harder, I think.

I recently realised that ‘Love over Gold’ and ‘Private Dancer’ – both Mark Knopfler songs, of course – are essentially the same song.  How that had eluded me for all these years, I do not know.  I noticed this because I actually listened to some Dire Straits while cutting the grass one day.  I suspect that means I’m officially allowed to turn 50 now.